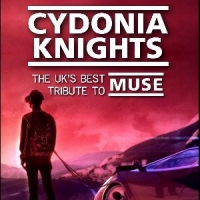 "Cydonia Knights are a tribute band to one of the worlds biggest rock bands 'Muse' who have sold over 20 million albums worldwide and won multiple Grammy, NME and MTV live music awards.

Formed by Muse fans, for Muse fans the band has meticulous attention to detail; visually and audibly producing an unparalleled Muse experience as close to the real thing as possible."