Because of the Times, Kings of Leon will return in 2022

Posted: 22nd September 2021
When You See Yourself tour now expanded with new shows 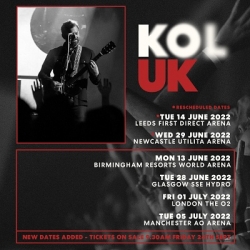 One of the biggest arena-rock acts in recent times has delighted fans with the announcement of further UK dates next year. Kings of Leon had recently rescheduled dates in Leeds and Newcastle to June 2022 but have now added new shows in Birmingham, London, Glasgow and Manchester during next summer.

The band have recently celebrated their sixth straight no.1 album with this year's acclaimed When You See Yourself, some 14 years after their inaugural chart-topper Because of the Times and almost 20 years since the release of their debut set Youth and Young Manhood.

The platinum-selling outfit has been packing out stadiums around the world ever since, with the UK still the siblings' most lucrative playground. You can expect these dates to sell out pretty quickly.

Tickets for the new dates will be on sale from now