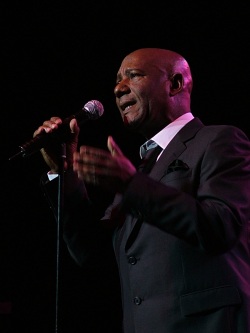 It may have been winter outside, but in our hearts it was summer.

This was all because of one man, and his music.

When you think of Hot Chocolate, theres only one image that comes to mind Errol Brown MBE.

My abiding memory of Brown was his appearances on Top Of The Pops wearing lurex pants and his famous wiggle thats sent shivers down the spine of many a pubescent teenage girl.

Away from the image of this inter-racial band three Caribbean blacks and two British whites Hot Chocolate were more than your average pop group, with their brilliant music spanning three decades, starting with Love is Life in 1970 ending officially with arguably heir best song ever, It Started With A Kiss in 1993, after which the band dissolved. There hasnt been a disco or party that didnt have one of their songs played. I played enough of them as a DJ. On chart they spent a massive 283 weeks.

In 1987 Brown left for a solo career which didnt take off, and the band split.

Ten years later, Browns revival was brought on by the re-issue of You Sexy Thing via the film The Full Monty, touring intermittently ever since.

Few have matched Hot Choc in terms of varied and soften sumptuous songs which embraced disco, classical and eastern flavours.

Of their generation they wrote some of the most memorable pop Britains airwaves have ever heared. Now just turned 60, Brown started his Farewell Tour 2009 at the seaside resort of Rhyl in north Wales.

Any chance of the resort replicating his Bahamas home temperatures were scotched by a stinging chilly blast of zero degrees, though things soon warmed up inside.

As youd expect from this stylish icon, dressed in smart grey suit, gentleman Errol exuded class and style for an hour and half, rolling back the years, reminding the packed house why his hits still resonate today.

Backed by five musicians and two back-ups, he delved into a potential 30 hit repertoire: we got 16. He began with 1983s What Kinda Boy You Looking For (Girl)? sending the ladies into swoon mode. It was fifth song in, Emma, when the show took off. Lets liven things up a bit, prompting the opening lines, Crazy, crazy, crazy.. hands above your heads, with handclaps engulfing the theatre as he went into Girl Crazy and Dont Stop.

Second to It Started With A Kiss, my personal favourite Ill Put You Together Again proved very popular, drawing oohs and ahhs.

Upping the party atmosphere So You Win Again got everyone singing as did the superb No Doubt About It. Inevitably, some audience mingling emerged. Thank you for the journey weve been on and the life youve given me..I feel so much love for you; Id like to dedicate this to you all for all the years. Hugs, kisses, roses, photo ops ensued as he bravely tried to keep his composure appropriately singing It Started With A Kiss. You could see the twinkle in his eyes as he mingled with his adoring lady fans.

With the chit-chat now limited, Shake it up, shake it, prefixed disco classics Heavens On The Back Seat Of My Cadillac, Disco Queen, Everyones A Winner and You Sexy Thing with his trademark wiggle in overdrive.

It was a simple encore one song: Thank You For The Night.

Clearly moved and struggling to hold back the tears he said, Youll always have a special place in my heart, bowing, he emotionally ended with ,Thank you, and God bless you all. I wrote this for you. Ill think about you every day.

Knowing the quality guy he is, he probably will.

The Verdict Classy end to a great career.