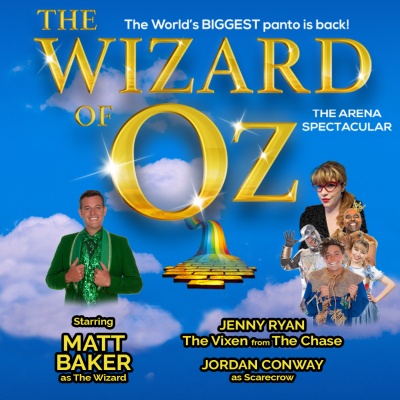 "After amazing previous productions of Elf, Cinderella and Peter Pan, WIZARD OF OZ is the brand-new spectacular Christmas show set to lift the art of arena panto right over the rainbow.

It will be performed on the world's biggest panto stage, (the equivalent of four London Palladium's), plus two mobile stages that travel around the arena as the yellow brick road unfolds in front of a 6,000 seat audience. Producer Jon Conway points out this is only half the normal arena capacity and with its vast foyers and high arena auditorium, he is confident it will be one of the safest covid aware performance spaces this Xmas."

The show will feature One Show/ Country File star, Matt Baker and Jenny Ryan (AKA "The Vixen") from ITV's The Chase.