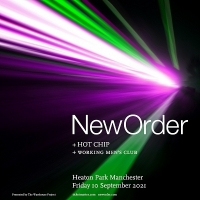 Successful and influential electronic rock and pop band, formed in Manchester in 1980 (after Joy Division), characterized by epic 12" singles dressed in arty sleeves and released on Factory Records.

The band split in 2007, but announced a reformation in 2011 minus Peter Hook.

New Order signed to Mute Records in 2014 and released the album "Music Complete" the following year.