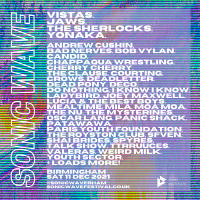 Sonic Wave Festival [Rescheduled from May 2020], date change from 24th May

Twang tracks have featured on football shows on both ITV and the BBC.