The Psychedelic Furs, Jah Wobble at Royal Albert Hall on Thursday 14th May 2020 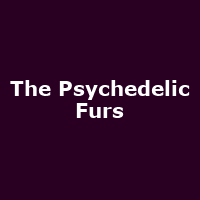