Paul Foot, Jessica Fostekew at The MCT At Alleyn's on Saturday 7th Dec 2019 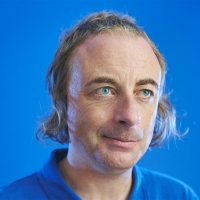