The Beatles: Hornsey Road with Mark Lewisohn at The Queen's Hall on Wednesday 27th Nov 2019 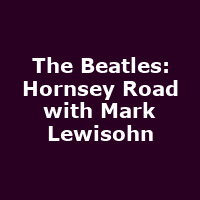