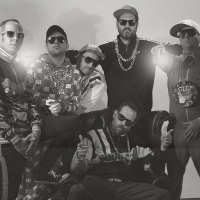 Familiar songs include "Your Missus Is A Nutter", "Guns Don't Kill People Rappers Do" and "By Any Means Necessary".