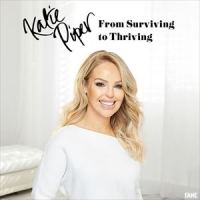 Katie Piper is an English television presenter, author and former model from Andover, Hampshire. Piper had initially hoped to have a full-time career in the media, but in March 2008 sulphuric acid was thrown in her face.

In 2009, she took part on the documentary: "Katie: My Beautiful Face", going on be a presenter on the TV shows "Bodyshockers", hosting and appearing in numerous others, including competing in the 2018 edition of the BBC's Strictly Come Dancing show.