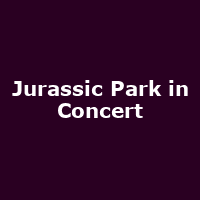 Harry Potter and the Order of the Phoenix - In Concert

Our Planet - Live in Concert

The Gruffalo and The Snail and the Whale in Concert