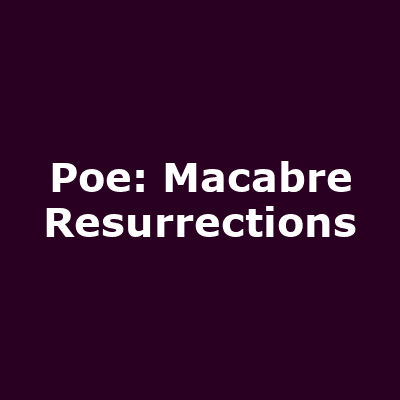 An innovative celebration of the gothic writings of Edgar Allan Poe. This project brings Poe back to Stoke Newington, where he spent much of his childhood. Second Skin Theatre are the Resident Company of The Church Street Theatre, which from November 16th is housed in the atmospheric 16th Century St Mary's Rectory, along Church Street, Stoke Newington.

This ambitious project is being brought to life by an expansive creative team. Second Skin Theatre have resurrected five of Poe's darkest stories, commissioning some of the country's most courageous and visceral writers who have brought them up to date for a contemporary audience. Our creative associates are transforming St Mary's Rectory and Graveyard this winter into a performance venue fit to house the macabre writings of Edgar Allan Poe.

Each piece will be performed in a different part of the ancient church, with one performance taking place in the graveyard - pushing theatrical boundaries and taking the audience far out of their comfort zone."

All five works will be framed by 'The Fallen Preacher' by Rob Johnston, directed by Anthony Lau and Andy McQuade.

The Black Cat by Mike Carter, directed by Andy McQuade.

Pit and The Pendulum by Jacob Hodgkinson, directed by Samuel Miller.

Masque of The Red Death by Nadine Hearity, directed by Hayley Byfield.

Cask of Amontillado by Richard Allden, directed by Yolanda Ferrato."

No admission for those aged under 13.

Audience members suffering from claustrophobia are requested to inform ticket staff on booking.