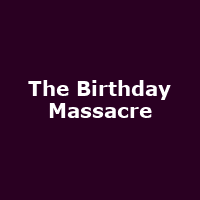 Events for The Birthday Massacre

Pauline Murray And The Invisible Girls