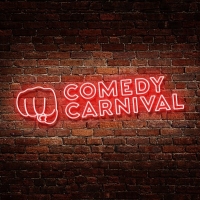 Live at the Chapel

So You Think You're Funny?

Stand Up For Shelter

The Best In Stand Up [Comedy Store]