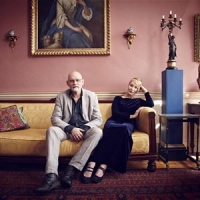 Much of their sound is derived from countries and unusual instruments from around the world - Persian, Chinese and the Baltics being the most obvious reference points, as well as Medieval and Gothic imagery.

Key releases include the albums "Serpent's Egg", "Aion" and "Into The Labyrinth". Their last 4AD album "Spiritchaser" was released in 1996, although the duo reformed in 2012 and released the album "Anastasis". In 2018 they issued "Dionysus".

Both members have issued solo albums.