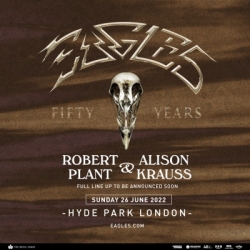 One of These Nights, Hotel California, Take It Easy and Life in the Fast Lane - all Eagles classics that have influenced far more than just a handful of country-rock tributes and '80s compilation albums. Seasoned artists like Garth Brooks, Midlake, Matthew Sweet, Slash and Todd Rundgren have been inspired by the '70s soft-rockers, citing the band's iconic songwriter, the late Glenn Frey as a major-player in their careers.

Another country singer inspired by the Eagles easy-going harmonics and musical prowess is Vince Gill, who has recently taken up vocal duties alongside Frey's son Deacon, in front of founding drummer Don Henley and early members Joe Walsh and Timothy B. Schmit. This present incarnation hasn't yet gathered in a recording studio but they do have decades of live shows behind them (in and out of the band) so any chance of seeing them on stage should be snapped up. It will be their half-century after all.

On 26th June 2022, BST Hyde Park will host a very special 50th anniversary headline show in London with a fitting support act in tow - Robert Plant and Alison Krauss. They too will come armed with an impressive back catalogue from a similar era, as well as an array of traditional roots songs as demonstrated on their acclaimed 2007 album, Raising Sand.

More supports are due to be announced in due course.

There is a limited Pre-sale available from now - see below!

You can also check out some of Eagles' finest moments on our special playlist.

The general on-sale will start from Friday, 5th November.