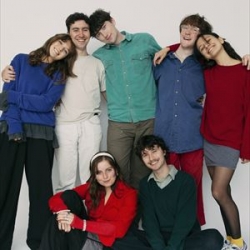 For the past two years or so, avant-garde alt-rockers Black Country, New Road have been issuing a steady string of artful singles to critical acclaim, as well as selling out many of their memorable shows around the UK.

Musically aligned to Television, Slint, Pavement, Half-Japanese, These New Puritans and Black Midi (with whom they've performed with), songs like Sunglasses, Track X and Science Fair are often an extended potent mixture of insistent rhythms, cyclical fiddle and sax motifs and crooned, bawled, screamed and emotional lyrical bursts from the belly. Imagine Klezmer rhythms, math-rock and free-jazz and you're someway there.

Most of these singles have recently been assembled on the LP For The First Time, prompting a Mercury Music Prize nomination and kickstarting a UK tour later this year, most of which has sold out. And so to 2022. The band have recently announced a second album of brand new material due next year, as well as another tour in the spring. Ants From Up There has just been teased by the single Chaos Space Marine which, although one of the band's shortest songs, thankfully doesn't let up in the quirky stakes.

Before the band's next proper tour in April (starting in Sheffield on the 6th), there's a huge hometown London Roundhouse show in February which promises to be something of an album launch - Ants From Up There will be released just four days before on the 4th.

Tickets for all dates will be available from now.