It's Good To See You, Henry Rollins 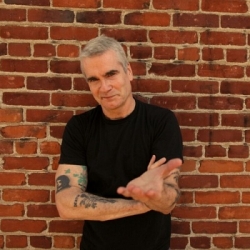 American rock singer, actor, presenter, comedian and activist Henry Rollins has always had plenty of interesting and thought-provoking things to say since his early inception as lyricist and performer with hardcore punksters Black Flag and his own Rollins Band, whose gritty noise-funk and anarchic grunge-rock soundtracked some bruising classics such as Liar and Low Self Opinion.

Rollins' more recent oeuvre has been spoken-word. Not so much just merely 'spoken', more often a melange of hollered, enthused, railed and becalmed words. One listen to any of his intense but often funny monologues has every sensory perception you'd expect to experience disappearing out of the window as Rollins' likeable personality spills over with enthusiasm, compassion and knowledge. His recent Keep Talking, Pal album covers everything from RuPaul, politics, fandom, Bowie, Ozzy and news media.

2022 will see him deliver his new Good To See You tour, which promises "to recount the events of his life in the brief pre-COVID period since the last tour.... It's been an interesting time and he's got some great stories to tell...". By the time he lands on our shores in February, he'll have even more material to work with - it should be quite a ride.