Come On Dexys!! Too-Rye Ay remixed for album and tour 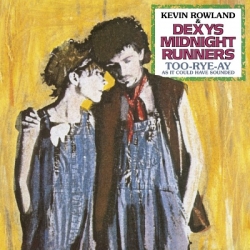 2022 sees the 40th anniversary of one of the biggest and most enduring singles of the '80s, Come On Eileen. A staple at parties, discos and weddings for almost four decades, the song was voted Best British Single at the following year's BRIT Awards and ensured its creators Dexys Midnight Runners weren't a one-off with their other chart-topper Geno - it was also a hit across Europe and the U.S.. More recently, the song has been covered by an exclusive NHS Choir and Robbie Williams.

Come On Eileen's parent-album Too-Rye Ay also appeared in 1982 to universal acclaim and saw Dexys transform themselves from a spot-on soul 'n' Stax ensemble into something of an elevated folk-pop collective. Spear-headed by singer-songwriter Kevin Rowland, their string-driven folk sound on Too Rye-Ay was augmented by newly-added virtuoso violinists Helen O'Hara and Steve Brennan (a.k.a. The Emerald Express), leading to further hits Jackie Wilson Said and The Celtic Soul Brothers.

This year has seen Dexys revisit the album in the studio with a newly remixed version which is due to be issued on vinyl and CD in September 2022, alongside a full promotional tour.

The shows, starting in Bath on 17th September and ending in London at the Palladium on 2nd October, will feature the re-arranged album performed in its entirety plus various favourites and classics from across the Dexys spectrum. The Too-Rye Ay, As It Could Have Sounded shows are bound to be a sell-out and a proper knees-up.

Tickets will be on sale from now.