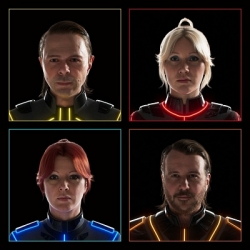 It seems almost inconceivable that nearly 50 years ago, Swedish pop behemoths ABBA started musical success by appearing at the Eurovision Song Contest in 1974 and sweeping all before them with the winning entry, Waterloo (their second attempt - Ring Ring didn't even qualify in 1973).

The married pairings of Agnetha Faltskog and Bjorn Ulvaeus and Anni-Frid Lyngstad and Benny Andersson went on to sell well over 150 million records worldwide, see huge hit Dancing Queen get inducted into the Grammy Hall of Fame and witness the box-office breaking Mamma Mia film bring dozens more ABBA songs to new generations. Fact: In my time working in record shops over the years, I've sold more ABBA LPs to students than Nirvana, Oasis and Pink Floyd put together. Who says the pop quartet aren't cool?

2021 will go down as the year that Sweden's biggest cultural imports announced a comeback. There's a new album in the pipeline - Voyage, their first studio set since 1981's The Visitors, will be released on 5th November and is guaranteed to bring fireworks to the Christmas chart rundown and wants lists. The two string-driven promo singles I Still Have Faith in You and Don't Shut Me Down have already caused a few excitable ripples amongst the fans. And to back it all up, there's going to be a a new ABBA show in 2022.

But this won't be nights, weeks and months of exhausting touring for the band who are now all in their seventies - this will be a futuristic 'virtual' stage show featuring holograms (ABBAtars!) of the foursome performing 'live' with full band at a purpose-built arena in London. Footage will be used from 1979 and digitally mixed for an unforgettable ABBA experience.

This won't just be a few dates either - we're talking a lengthy residency that is set to run from May through to September at the new ABBA Arena in East London, close to the Olympic Park complex. After that? Who wouldn't bet against a city-to-city tour across the globe.

Tickets for the virtual Voyage shows will be on sale from now and will range from standing, seated and booth prices. More dates have been added.