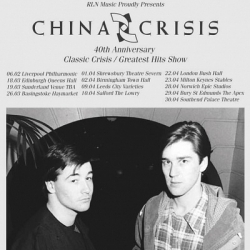 A deal with Virgin soon followed and after a few false starts, China Crisis chalked up their first proper hit with the blissed-out ballad Christian. With core duo Gary Daly and Eddie Lundon at the helm, the band have been active for four decades, notching up several hit singles and albums that remain revered to this day including Top 10 smash Wishful Thinking. They even impressed the late Steely Dan co-founder Walter Becker into joining them for the album Flaunt the Imperfection.

So what better way to celebrate forty years of music than to present the songs in a new light? In 2022, Lundon, Daly and a crack team of musicians and arrangers will bring you Classic Crisis, a show of their favourite songs given an orchestrated twist in theatre venues across the country.

The tour is set to start at Liverpool's Philharmonic on 6th February, before continuing around the UK throughout the spring. Selected tickets are on sale now. There is likely to be an album release to tie in with the tour sometime in 2022.

China Crisis will also be performing in a more traditional band line-up at various venues throughout the rest of this year - selected dates are available now.