Anthrax are coming for you all 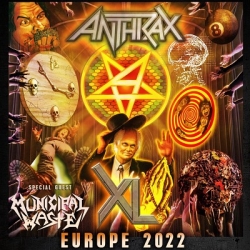 American metal icons Anthrax have announced a string of European dates in 2022 to celebrate four decades since their formation in the early '80s.

The thrashing quintet, whose 1990 album Persistence in Time recently celebrated its own little birthday (21 years!), will kick off the whole tour in the UK at the home of heavy rock in Birmingham on 27th September, before Manchester, Glasgow, Newcastle, Leeds, Nottingham, Bristol and finally Brixton on 8th October before crossing the channel for the remainder of the jaunt. There are no Ireland dates announced as yet but never say never.

The band's last album For All Kings was issued in 2016 and garnered a handful of awards, including the much coveted Best Heavy/ Melodic Metal Album, four years after being honoured by Metal Hammer as being 'Metal As F**k'.

You can expect to hear plenty of classics from the past 40 years from albums such as Fistful Of Metal, State of Euphoria and the aforementioned Persistence of Time. Support will come from Municipal Waste.