OMD building foundations for the autumn 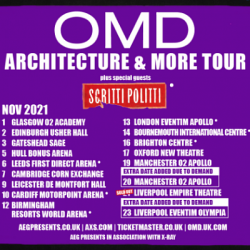 Since 1979's Electricity single, Wirral's OMD have been one of synth-pop's most successful outfits. A string of hit albums and singles throughout the '80s set up key songwriters McCluskey and Humphries for life, but it didn't stop there.

Although OMD had a 15 year hiatus from the late '90s onwards, the band have retained their fanbase with regular reissues and some cracking 21st century pop albums, the pick of which was 2013's Top 20 opus English Electric with thumping lead-single Metroland.

In years gone by, their key works have included 1981's breakthrough album Architecture and Morality and during its 40-year anniversary it's a perfect excuse to perform the LP's classics such as Joan of Arc, Souvenir, Maid of Orleans and European single She's Leaving plus numerous hits across the board.

Autumn 2021 will see OMD take their classic set on the road, beginning with Glasgow on 1st November and continuing until an extra date added to Liverpool on the 23rd, supported by Scritti Politti on certain dates.

Also, announced for March 2022 are two special "40th Anniversary Celebration" gigs at the Royal Albert Hall as well as a Let's Rock Wales slot in the summer.