The Dury's out! Baxter announces book and tour 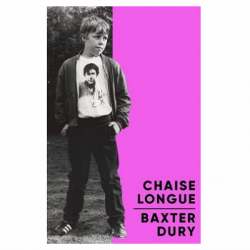 In the late '70s, after a brief run with Kilburn and the High Roads, punk-rock icon and raconteur Ian Dury hit the heady heights of fame with his band The Blockheads. He garnered a reputation as a classic front-man as well as being somewhat gnarly and tricky to deal with.

Experiencing this whirlwind performer during the latter end of the '80s first hand was son Baxter who had been unceremoniously relocated to his father's old Victorian put-me-up sofa when Ian's new 6ft 7in minder moved in and took over the spare room.

His father dubbed the sofa the "chaise longue", the inspiration behind the title of Baxter Dury's new memoir. Released on 5th August, Chaise Longue concerns Baxter's childhood years growing up with (and frequently without) his old man as he pursued a career in film as the son pursued a career in school truancy and, in his '20s, a few personal disasters.

Baxter will be promoting the book with a few launches and Q&A slots at festivals, including Sea Change Presents in Totnes, as well as a handful of autumnal headline dates in Bristol, London and Manchester. No doubt the book will get a mention at the trio of shows as well as tracks from his most-recent and acclaimed album The Night Chancers.

Tickets for the three dates go on sale now.