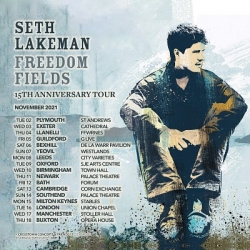 Coming from a long-line of musical Lakemans, Devon's Seth Lakeman has perhaps enjoyed the most success out of all of them. A Mercury Music Prize nomination, a consistent run of hit albums and a formidable musician both on record and live has helped the fiddle-player carve a notch on folk music's bedpost for the best part of twenty years. Add in his stint in the sibling trio The Lakeman Brothers (with Sean and Sam Lakeman) and work with Cara Dillon and you're looking at nearly three decades of recordings.

That string of hit albums started in 2006 with Freedom Fields, named after a Plymouth park and initially released on indie imprint iScream before being re-packaged and re-promoted by Virgin's offshoot Relentless. The singles Lady of the Sea and The White Hare helped ensure the album's gold status and it became something of a mainstay in folk's folklore. Quite an achievement for a locally themed album to go national in a short space of time.

With such a vast catalogue to choose from, it's not surprising Lakeman is a regular on the tour circuit. However, for his next excursion, he'll be focusing on Freedom Fields in late 2021 when he'll take it on the road.

Fittingly, the opening night takes place in Plymouth, then nearby Exeter before meandering across the country to Buxton until mid-November.