The DMAs shine on with The Glow tour 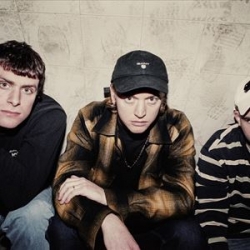 The rise and rise of Australia's pop-rockers DMA's continues apace with a tour to promote 2020's The Glow album and this year's Live In Brixton collection.

Sounding not unlike a hybrid of The 1975s, New Order and Snow Patrol, DMAs have muscled their way into the UK album charts with every one of the five LPs issued thus far, including The Glow which reached number 4.

Covid put paid to an accompanying tour last year and although we're not out of the woods yet, the hope of venues finally getting opened again has prompted the band to announce a string of shows across the UK and Ireland. Not content with this, they've only gone and added another handful of shows including a rare show in Greenock, plus Portsmouth, Sheffield, Cardiff, Birmingham, Belfast and extra tickets for one of the Manchester dates (1st Nov).

The six new gigs go on sale now and all are expected to sell through pretty quickly. Other shows are sold out or very close to being so.