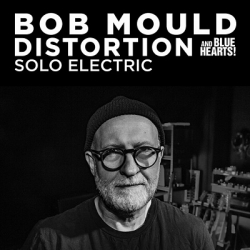 The global pandemic has delayed many important events during the past 16 months and as this article takes shape, the Tokyo Olympics 2020 has finally kicked off in Japan.

Another pair of important events in 2020 were the releases of not one but two Bob Mould albums. New material in the form of Blue Hearts appeared in the autumn - a visceral, melodic and intelligent collection that recalled Mould's contributions to early Husker Du albums such as New Day Rising and Zen Arcade - followed by the expansive collection Distortion, a career-covering multi-disc box-set that bookends his 1989 Workbook period and 2019's Sunshine Rock and all points in between.

Typically though, the C word put paid to any promotional activity but with hope on the horizon and venues gradually reopening, tracks from both albums will now be performed live as part of Mould's UK and Ireland leg of his Distortion and Blue Hearts tour. Billed as a 'solo electric' show, the tour begins in Dublin on 19th January and continues over to the UK until Leeds on 7th February.