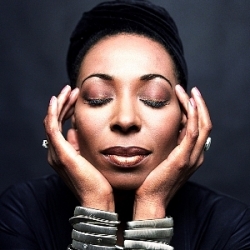 From Herefordshire to Harlesden to tens of thousands of record collections thereafter, Carroll Thompson's heritage and musical legacy has rightfully earned her the title of "Queen of Lover's Rock".

One album certainly crowned Thompson with accolades and glory - 1981's Hopelessly In Love, released at a time when lover's rock was still at its peak in the London area with the likes of Louisa Marks, Sugar Minott, Ken Boothe, Johnny Nash, John Holt, Deborahe Glasgow, Gregory Isaacs and latterly Maxi Priest all contributing to a scene that spanned two decades before becoming something of a niche genre.

Despite very little support from national radio, Hopelessly In Love shifted around 30,000 copies and spawned a handful of sweetly-sung albums and extended discomix 12", including Yesterday (NOT a Beatles cover - Thompson wrote most of her material) and the underrated You Are The One. She also appeared as a collaborator with Aztec Camera, Movement 98, Courtney Pine and Aswad as well as sessioning with (ahem) Stevie Wonder, Michael Jackson, Chaka Khan, Pet Shop Boys and a few more you may have heard of.

2021 heralds the 40th anniversary of what has become a firm favourite with Estelle, Saint Etienne's Sarah Cracknell and Hefner's Darren Hayman, as well as a regular inclusion in various Top 100 lists.

As well as a new physical reissue with extra tracks due in the autumn via Trojan Records, Carroll Thompson has announced an October/November tour to promote Hopelessly In Love, starting in Leeds, then Birmingham and finishing in London.

Tickets are on sale now for most shows.