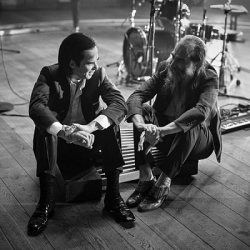 There's just no stopping the Nick Cave juggernaut at the moment. After he and his Bad Seeds delivered one of 2019's most astonishing and atmospheric albums in Ghosteen, he's finally teamed up with band-member Warren Ellis for what is the pair's first studio album together (save for the occasional soundtrack work).

Carnage was released in mid-June to universal acclaim, chalking up Cave's umpteenth Top 40 album by reaching number 3 and giving the much-lauded Ellis some exposure rarely seen before, other than the numerous soundtracks he's worked on of course.

With Carnage set to be in many end-of-year rundowns with fans and critics alike, it makes sense to tour it. Cave and Ellis will take the hit album on the road during September and October, starting in Poole's The Lighthouse venue and ending up in Cave's hometown Brighton, via two Royal Albert Hall shows and a string of smaller venue dates throughout. Aberdeen, Glasgow, Cardiff and Portsmouth have just been added.

There will also be a Nick Cave and Bad Seeds b-sides and rarities compilation issued in October, compiled by Cave and Ellis.