Posted: 12th July 2021
Electro-legend and vocal outfit to turn up the heat with one-off Camden date 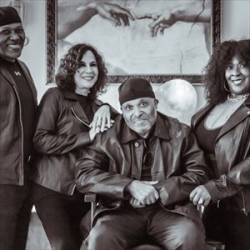 Breakin' news! It isn't every day that a true hip-hop and club-music pioneer rolls into town. But on 10th December 2021, the legendary Arthur Baker will be doing just that with more than just his suitcase.

Having recently reformed his attendant vocal outfit Rockers Revenge, he is proud to present their very first London show at Camden's Jazz Cafe almost forty years after filling dance-floors with the Baker-produced "Walking On Sunshine".

Baker's C.V. is pretty impressive - he produced and mixed other '80s classics such as New Order's "Confusion" and "Thieves Like Us", Freeez' "IOU", New Editions' "Candy Girl", Tommy Boy Records work by Afrika Bambaataa and Planet Patrol and his own breakdance bangers including "Breakers Revenge" from the Beat Street film and "Put The Needle To The Record" as Criminal Element Orchestra. Early collaborations include mixes with The Latin Rascals, Hall and Oates and Al Green, while more recent eclectic productions and endorsements have involved Rennie Pilgrem, Timo Maas, New Order (again) for recent single "Be a Rebel" and the Planet Rock-sampling "Twerkulator" by City Girls.

You can expect a beat-busting show. Tickets on sale now, priced from £28.