Win a copy of the new Daughtry CD Baptized

Posted: 1st February 2014
We have three copies of the brand new album Baptized to give away - enter now! 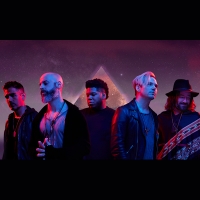 Multi-platinum selling rock-pop outfit Daughtry have long since left American Idol behind and whilst they are the third biggest selling act to come out of the series (behind Kelly Clarkson and Carrie Underwood), the band's audience continues to grow.

Frontman and lynchpin Chris Daughtry has set his sights on bigger things and polished pop and pin-sharp melodies is his aim. New album "Baptized", the band's fourth since 2006, is as close as he's got so far to his target and has already garnered a Top 10 placing in the US and a respectable #42 over here.

A mark of a band's popularity is their ability to sell out tickets - their upcoming tour in March is getting close to doing just that (Shepherd's Bush on the 26th has already run out of face-value tickets).

To celebrate the band's ascension, we have THREE copies of their latest CD "Baptized" up for grabs. You can win a copy by clicking the Enter Competition button below and following the dead simple instructions.

The competition ends on Monday 10th February and is open to UK and Ireland residents only. Good luck!!