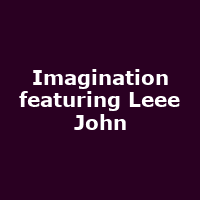 Flashback! Music and Lights! Body Talk! No it's not Just An Illusion, it's for real - slinky Brit-soul outfit Imagination are back in demand once again due to an upcoming tour and an accompanying greatest hits compilation.

Founded by key songwriter Leee John, with Ashley Ingram and Errol Kennedy in 1981, Imagination were in and out of Top of the Pops studios and Radio 1 playlists for the first half of the '80s and notched up a string of memorable hits including the classics mentioned above, plus 'Looking At Midnight', 'Changes', 'In The Heat Of The Night' and 'Thank You My Love'.

To celebrate the band's legacy, Legacy (fittingly) have issued 'Flashback: The Very Best Of Imagination' which contains all the big hits plus recent new single 'Krash (All Nite Long)'.

Meanwhile, to support the compilation, Imagination featuring Leee John will be on tour across the UK and Ireland during October, starting in Dublin on the 20th and continuing to Manchester, London (Fulham), Milton Keynes, Bristol and Birmingham - and we've got a very special competition for you!

To win, all you have to do is click on the Enter Competition button below and follow the easy instructions.

The competition is open to UK and Ireland residents only and you must be able to make your own travel and accommodation arrangements to attend your chosen show (there are six to choose from - see below).

The competition closes at midnight, Tuesday 15th October 2013 - winners will be notified by email on the 16th!