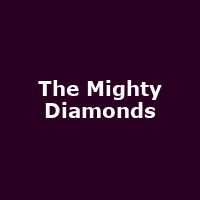 These days, it's hard to imagine some bands staying together longer than forty minutes, let alone forty years yet Jamaican reggae stalwarts The Mighty Diamonds, comprised of Tabby, Bunny and Judge, have succeeded in remaining friends and performers since the late '60s. Perhaps even more incredibly, their music is as timeless and as in demand as it was in their heyday.

The core trio have created a wealth of harmonic reggae music over the years, blessed with voices of angels and endorsed by the likes of John Peel, Don Letts and David Rodigan. Punks courted their roots and Rastafarian values during the seventies, while school-age chart-toppers Musical Youth adapted one of their songs for their massive #1 hit in 1982, "Pass The Dutchie" (replacing the druggier term "Koutchie").

Albums such as "Right Time", "Planet Earth" and "Deeper Roots" appeared on Virgin's landmark Front Line imprint, ensuring them wider exposure, with later releases still retaining the harmony and the vibe in equal measure, minus the marketing budgets. Fittingly, an early compilation was tagged "Vital Selection" - how true.

If you want to witness the magic of The Mighty Diamonds, read on. The band is back in the UK during the autumn with a raft of shows.

First stop is Leeds on 17th October, followed by Manchester, Birmingham, Glasgow, London and finally, Norwich on the 25th.