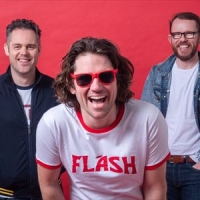 Pop quiz: how many Scouting For Girls hits can you name? 'There's that 'lovely' tune, erm... another one.... Erm, er... I give up'. Well, you shouldn't give up at this point because they've had surprisingly more Top 40 successes than you might first imagine.

Formed some eight years ago by a trio of London schoolfriends, within three years the lads had notched up a big hit and a triple-platinum debut-album. That radio-friendly hit was "She's So Lovely", the sort of song that has sound-tracked a thousand TV idents and even more student daydreams. Proof that Scouting For Girls aren't one-hit wonders, they promptly notched up another four Top 40 hits simultaneously, including "Elvis Ain't Dead" and "Heartbeat", interspersed with a #1 album.

Their first chart-topping single came in 2010 with "This Ain't a Love Song", followed by another pair of Top 10 albums and loads of sold out shows. Next up is their Greatest Hits album, due out today and the spear-head for several shows throughout the year, plus the single "Millionaire" (issued last week).

First up are several summer racecourse shows across the UK (all on sale now) including Doncaster, Chepstow and Windsor, mingled with a couple of festival appearances (including V), followed by further, more typical, headline shows in November.

Stops on their autumn 2013 Greatest Hits tour include Norwich, Portsmouth, the Royal Albert Hall (!), Manchester and many more until Liverpool on 24th November.