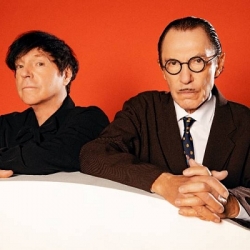 This town ain't big enough for the both of us, they proclaimed some 40 years ago (give or take a few months) - how true that has been. Except that perhaps the pop charts weren't big enough. Songs the size of mountains, vocals higher than the sun and lyrics that confounded and bemused, Sparks were never ever being boring, just eccentric - radio indulged them for a while, with early '70s hits such as "..This Town Ain't  ", "Something For The Girl With Everything", "Amateur Hour" and "Never Turn Your Back on Mother Earth".

Later on they teamed up with Daft Punk's new best friend Giorgio Moroder for the excellent "Number One Song In Heaven", "Beat the Clock" and "When I'm With You", beating the French duo by some thirty years. In later years, having retreated from the UK scene for a while, they've served up playful craziness in the form of "Lil Beethoven" and the most recent studio album, 2009's "The Seduction of Ingmar Bergman".

Whilst the majority of their output is backed up by other band members or heavily synthesized, it's their live acoustic shows that have been filling venues on both sides of the Atlantic. Now it's time for the return - or the revenge!

Billed as 'The Revenge of Two Hands One Mouth', the Mael brothers' next tour will encompass more of their extensive catalogue with just keyboards, voice and the audiences for company - it's going to be intimate and very special (again).

Ron and Russell will kick off their UK visit with the first of three London shows at the Union Chapel on 24th November, before heading north to Glasgow on 25th, then south to Bristol on 27th (on sale earlier) then the final two shows in London in December.

Tickets are on sale from now, priced at £22.50 for regional shows and £25 for the capital.