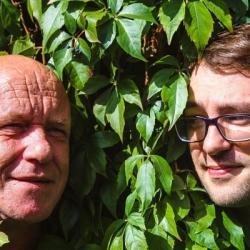 Mention the word 'ambient' nowadays and many people would think temperature or lighting or, at best, an estate agent's description of a property's conservatory. Insert the word 'music' after it and you have The Orb encapsulated.

Formed in 1988 by Alex Paterson and KLF's Jimmy Cauty, the duo's mutual love for the Enos Brian and Roger, Kraftwerk and dub spilled over into their DJ sets and, eventually, their own releases. Interspersed with spoken-word samples derived from old space exploration films and sci-fi programmes, The Orb's timely releases were the antidote to the full-on hedonism of acid-house and rave, providing an aural come-down in a quiet corner of the world (or a field just off the A12).

Cauty left to chase the KLF dream and Paterson hooked up with Kris 'Thrash' Weston to craft the landmark double-set "The Orb's Adventures Beyond The Ultraworld", a sprawling epic journey that set a precedent and made ambient 'cool' again. Further releases and line-up changes over the years have resulted in a considerable body of work that defies definition - their last albums have seen collaborations with Pink Floyd's Dave Gilmour and reggae icon Lee 'Scratch' Perry, both very good.

To celebrate their 25th anniversary, current members Paterson and Fehlmann will embark on an autumn tour. Confirmed so far are shows in Brighton on 12th October, followed by Reading, Manchester, Bath and London (with special guests System 7) with other shows to be announced in due course.

Tickets are on sale now, priced at £13 - £15. You can expect a wide cross-section of classic blissed-out material throughout the evening.