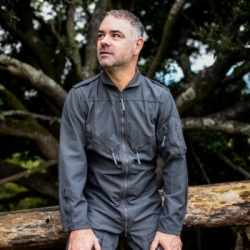 After co-founding the successful all-genres hybrid that was The Beta Band and dabbling with the alter-ego of King Biscuit Time after the band split, it's fair to say that Steve Mason's musical career has reached yet another pinnacle.

Some might argue that this is well overdue, especially since Mason has already one solo album to his own name. 2010's "Boys Outside" sold modestly in comparison to his previous band's efforts but spawned a few super Mason tunes, namely the singles "All Come Down" and "Am I Just a Man".

So it was refreshing to see his second self-branded album jump into the listings at #34. "Monkey Minds in the Devil's Time" has all the essences of a key slow-burning album with the whiff of end-of-year award-winner about it. Perhaps, even a Mercury nomination. Not surprisingly, Steve Mason is back in demand once again to the point that his next UK tour has already generated plenty of interest south of the border, months ahead of the shows taking place. Scotland - it'll soon be your turn.

Mason has announced a handful of Scottish shows to kick off the tour in home-turf style. Inverness will be the first stop on 24th October, followed by Aberdeen on 25th, Edinburgh on 26th and Glasgow on the 27th.

Tickets are on sale now, priced from £17 upwards. Demand will be high.

In addition, Steve Mason will be appearing at the Green Man Festival 2013 and Latitude.