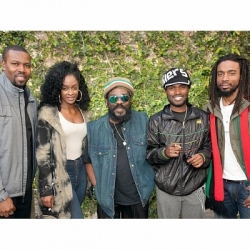 Just about everyone in the world has heard a Bob Marley song or, if pushed, can at least name one of his hits. During his short life, Marley touched lives with his simple yet beautiful melodies and heartfelt lyrics, often devoted to the downtrodden and the forgotten but always intrinsically memorable. A roots ambassador who squeezed reggae into the mainstream without compromising on quality, Marley's legacy still lives on some three decades after his death.

Apart from his notable catalogue being aired on radio frequently, his original backing band The Wailers, led by originator Aston Barrett and featuring experienced musicians such as Keith Sterling and Drummie Zeb, often wheel out the man's classics on tour. The legend lives on.

And it's "Legend" that will form most of The Wailers' next UK tour in the autumn. The six-times platinum compilation, released posthumously in 1984, three years after Bob's death and still the biggest-selling reggae album of all time, features some of the strongest songs to come out of the Marley stable. "Is This Love?", "Could You Be Loved?", "Three Little Birds", "Exodus", "No Woman, No Cry", "One Love" - there can't be a soul out there who cannot hum at least one of these spirited songs.

Which is why seeing The Wailers live on tour promises to be something a bit special. Glasgow will be the first stop on 26th September, followed by Newcastle, Manchester, Sheffield, London and Oxford on 2nd October.

Tickets are on sale now, priced from a very reasonable £19.50 upwards.

There is also an Irish show up for grabs now - Dublin's Academy will host a show on 3rd October, priced at 30.50.