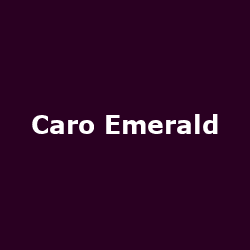 Bridging the gap between pop and jazz, without resorting to 'bonkers' costumes or endless guest appearances from ill-fitting rappers, Caro Emerald has the touch of the traditional about her. And that's perhaps her strongest weapon, aside from her tonsils.

Opting to stick with straight-edged but sassy party tunes, Dutch singer Emerald has brought the golden-age of music kicking its heels and wiggling its hips into the digital era with aplomb. Her debut-album "Deleted Scenes From The Cutting Room Floor" surpassed expectations by out-selling Michael Jackson's "Thriller" in the Netherlands, hogging the top spot on the album charts for over 30 weeks.

Sophomore album "The Shocking Miss Emerald" followed its predecessor to #1 in her come-country, also giving the singer her first UK chart-topper to boot. Singles such as "Tangled Up" and "Liquid Lunch" have continued the tradition of radio-friendly successes and Jools Holland gave her another leg-up on his recent series of Later With ...

Unsurprisingly, with the exception of Glasgow on 11th September (a few spaces left from £28.50), her upcoming 2013 tour has all but sold out - which leads us very nicely onto 2014. Caro Emerald has earmarked another run of shows to satisfy demand, starting with Bournemouth on 8th March, followed by Cardiff on the 9th, Plymouth, London, Leeds and more halls and arenas until Birmingham on the 22nd.

Tickets are on sale now, priced from around £22.50. Note that Emerald hasn't performed at one or two of these places before (Plymouth, Nottingham etc) so demand should be pretty high for these.