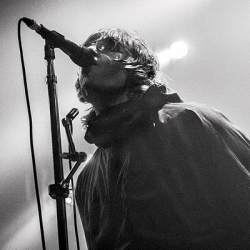 To those that doubted the longevity of Beady Eye, a cursory glance at chart statistics may or may not confirm the band's future direction, popularity-wise. With album number two, "BE" issued last week, they've improved upon debut-album "Different Gear, Still Speeding" by one place. By their third release, they may have equalled brother Noel's chart-topping achievements.

For now though, Liam Gallagher's infinite high continues with the announcement of a full UK tour for the autumn. After performing a not-so-secret set on the Other Stage at Glastonbury last weekend, the mainly-Oasis troupe have their (sorry) beady eyes set on ushering that new album onto as many iPhones and into as many collections by the end of the year as is humanly possible. A tour beckons, what else?

Geared towards large classic venues across the nation, Beady Eye will romp and stomp their way into Dublin for an opening night salvo on 7th November, followed by Glasgow on the 10th, Leeds on the 12th then Newcastle, two nights in Manchester (yah boo Robbie Williams...) and more until Hammersmith on the 21st.

Tickets are on sale now, priced from £27.50 upwards. Expect a fast sell-through and a firm 'flick of the finger' from the band.

Prior to the tour, you can catch Beady Eye perform at Mallorca and Ibiza Rocks, Benicàssim and back home in time for V!