Pixies return with new material and 2013 UK and Ireland tour 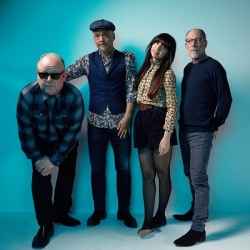 For those that can remember the heady days of the late'80s and early '90s American college rock-scene - there was a wave of great pre-grunge outfits being imported at the time - then news of a tour from the Pixies will be met with enthusiasm. Quite simply, Frank Black's charges were among the tightest, fiercest and noisiest outfits of the time, both live and on record.

This writer saw them at Glastonbury in 1989 and they were perfect stage-partners for the preceding band, Throwing Muses (4AD label-mates at the time). Whereas the Muses charmed their way into the crowd's hearts, Pixies tore them up and gave the Pyramid Stage a right royal shoeing in the early evening. It was as punishing a set as you could witness, with many tracks taken from their first few releases, including the recently issued best-seller "Doolittle". 'Oh My Golly!', indeed.

For 2013, things look a little different - Kim Deal left a few weeks ago (replaced by another Kim (Shattuck)) and releases are from the band have been rarer than honest politicians - but Pixies remain a vital cog in the wheels of alternative rock. Last week, despite Deal's departure, they unveiled a brand new song, their first since 2004. "Bagboy" is a bit special - a slower chunk of Pixies funk, for sure, but a grower and a taster for what's to come. Oh, and it's FREE from the band's website (www.pixiesmusic.com).

Until an album is officially finalized, Pixies have confirmed a European tour, which will include UK and Ireland dates. Dublin (on sale now) will be the first stop on 18th November (now sold out, but second Dublin date added for 19th), followed by Manchester on the 21st, Glasgow (available now) on 22nd and Hammersmith on 24th.

Manchester and London tickets are on sale now, priced from £27.50 upwards. Tickets are bound to fly....