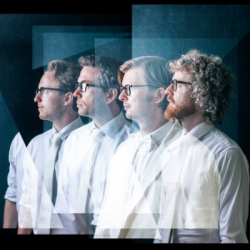 In recent months, Messrs Willgoose and Wrigglesworth have become something of a must-have for festival organizers and a must-see for the crowds. It's certainly been a busy summer for the sample-friendly duo, primarily down to their superb debut-album "Inform - Educate - Entertain", a top 40 smash, no less.

Not surprisingly, they'll be at Glastonbury, as well as Beat-Herder, Green Man and Truck plus others. No matter where they are on the bill, turn that frown upside-down and go and see them (I speak from experience).

Their most intriguing gig in the near future is supporting New Order at Jodrell Bank Observatory on 7th July. It's a fitting venue - the iconic conical shape of the Lovell telescope is a feature on much of PSB's merchandise and will form an ideal backdrop for the band.

If you can't make it to Macclesfield in July, get ready for some exciting news - the pair will be back on the road during the autumn. After an already mammoth headline tour back in the spring (they even played shows around the Scottish Highlands), the best-dressed synth and drum-wielding chaps in the land will repeat the process and play another month's worth of concerts in the autumn.

First stop is Aberdeen on 4th November, followed by Glasgow on the 5th, Edinburgh, Manchester, London and many more until Southampton on the 28th.

Tickets are on sale now, priced from around £12 upwards.

As a special treat, by way of the medium of film, you can listen to the early non-LP track "Dig For Victory", a prime example of their best work.