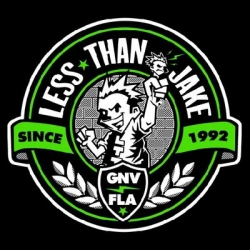 For what looks like a jam-packed rock-heavy autumn and winter, three key bands from the genre have announced a triple-bill UK tour. Set to take place during the early part of 2014, the jaunt will star a trio of big names spearheaded by Fat Wreck Chords re-signees, Less Than Jake, who celebrated their 20th year in 2012.

With an album of new material expected from the band during the autumn/winter period, 2014 seems like a perfect time to tour. Joining the ska-punksters are the not-dissimilar Reel Big Fish who have been carving up the U.S. on the Vans Warped Tour. They too have new material in the offing, although 2012's "Candy Coated Fury" isn't so distant in the memory as to be forgotten already.

As well as these two big guns, rap-rockers Zebrahead will complete the rout. They too have new material confirmed - August heralds the release of their tenth studio-album, "Call Your Friends". With all this new material flying around, it's hardly surprising that the three outfits have hooked up to entertain you with it.

First stop on the tour is Cardiff on 1st February 2014, followed by Bristol, Manchester, Newcastle and many more until Shepherd's Bush on 14th AND 15th - two nights to cater for the demand, no doubt.

Tickets are on sale now, priced from £18.50 upwards. There's a pretty big chance these will sell through quickly....