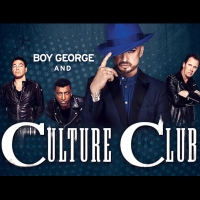 Another artist who made his name in the '80s has stepped up to the creative plate with new material. But, in a similar nod to Dexys and (yes) Johnny Hates Jazz, Boy George has unveiled a few details about his first brand new self-penned material for over 20 years.

And a long-awaited tour.

Having made a name for himself as a DJ and clubbing guru, playing out to packed crowds across the globe, George O'Dowd has renewed his relationship with a recording studio and some old mates to craft an album with one foot in dance-music and the other in pop. The first fruit of these labours is the single "Coming Home", released as Dharma Protocol featuring Boy George. It features Culture Club bassist Mikey Craig in the mix and is a bit nifty in the 'tune' department - check it out for yourself.

It serves as a perfect taster for his first studio album for two decades - "This Is What I Do" will see the light of day later this year and will feature some as-yet-unannounced special guests, a few of whom will feature on Boy George's UK tour which kicks off in the autumn.

First stop is Manchester on 3rd November, followed by Birmingham, Leeds, Glasgow, Oxford, London and finally, Brighton on the 11th.