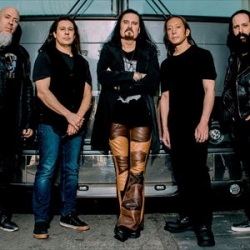 True heavyweights of serious progressive heavy-rock, Dream Theater may have shown a sense of humour for their last album, at least as far as the title went. After losing founder-member and drumming lynchpin Mike Portnoy, the band recruited another Mike, a Mangini by name, and entitled album number eleven, "A Dramatic Turn of Events".

While it's doubtful anyone was rolling around laughing, a more apt title might have been hard to find, given the circumstances. After Portnoy had helped steer the Dream Theater ship through hell and high water since the '80s, other founders John Petrucci and John Myung took stock quickly and vowed to continue with a new drummer.

Every cloud and all that - the rock outfit decisively excelled themselves in 2011 with that first post-Portnoy material, reaching the Top 10 in eight countries, even a #1 in Finland, meaning that expectations might be even higher for album number twelve.

Out in September, "Dream Theater" will be the first to feature Mangini in all his creative glory and will play a major part of their next tour.

For that tour, however, you'll have to wait until early 2014. The UK leg will take in just a few shows including Manchester's Apollo on 13th February, then Wembley Arena on the 14th and Wolverhampton's Civic Hall on the 15th. It is unlikely that the band will add to the tour as the UK shows are part of an already busy European leg.

Tickets are on sale now, priced from around £29.50 - £35. You can expect a dash for tickets and rapid turn around.