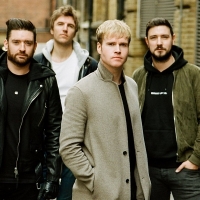 A glance at Kodaline's CV suggests these chaps have been around for a good few years - and, you'd be right. Sort of.

Originally formed in 2005 and named 21 Demands, they made Irish chart history by becoming the first independently-released outfit to top the singles charts (with "Give Me a Minute").

But, as so often happens, disagreements about the band's name spilled over into a unanimous decision to switch it to Kodaline, promptly earning themselves acclaim and award nominations. After issuing their first single for several years earlier this year, the anthemic "High Hopes" cantered to #1 in Ireland and the Top 20 over here. More recently, follow-up "Love Like This" achieved Top 30 placings on both sides of the Irish Sea, continuing the Dublin music-scene's standard previously set by U2, Thin Lizzy, My Bloody Valentine and more.

Big festival slots this year suggest that Kodaline have landed - they've got Hard Rock Calling 2013 with Kasabian coming up on Saturday 29th June, followed by Belfast's Tennant's Vital 2013, Leeds, Reading and well, you get the idea.

After playing to massive crowds throughout the summer, Kodaline will finally get down to supporting their debut-album "In a Perfect World", released last week. Already a #3 smash, the album looks set to be a crowd-pleaser when the band hit the road in November.

Dates kick off in Birmingham on 8th November, followed by Oxford, Shepherd's Bush, Leeds and more until Bristol on the 18th.

Subsequent previously-announced shows in Ireland are sold out, by the way.