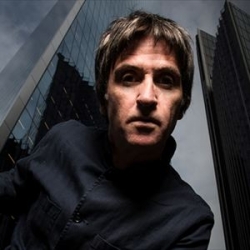 After spending the best part of six years as a pivotal member of The Smiths, being a transient member of The Cribs, Modest Mouse and The The, plus a short but important role as co-founder and song-writing partner to Bernard Sumner in Electronic, Johnny Marr has finally been recognized by NME as (ahem) a Godlike Genius.

Last week, the magazine duly handed over an award bearing that very same title, explaining that 'he's continued to push boundaries' and 'rewrote musical history'. Looking at some of the other 'geniuses', he's in good company - NME have doled out trophies to Dave Grohl, Noel Gallagher and Paul Weller in recent years.

With his career often involving others, it was refreshing to witness the release of his debut solo album, some thirty years after joining The Smiths. "The Messenger" surpassed expectations and has resulted in many sold-out shows, not to mention a Top 10 showing (albeit only for a couple of weeks).

In the autumn, after a summer of festivals, Marr will embark on his first full UK tour since the release of the album, calling at Gloucester on 4th October, Wrexham, Newcastle and more until London on 18th October.

Beforehand, Johnny Marr will hook up with his old Electronic stooge Bernard Sumner at Jodrell Bank on 7th July, as part of New Order's huge day at the famous observatory near Macclesfield - tickets are priced at £39.50. Other festivals include Glastonbury (sold out) and Reading/Leeds.