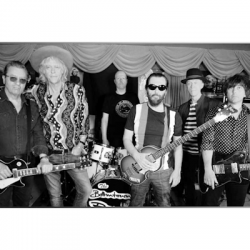 With a triumphant appearance at a major festival just behind them - Isle of Wight - and two others on the horizon (Live at the Marquee in Cork and Devon's Chagstock Festival 2013), The Boomtown Rats are on a high at the moment. Original members Garry Roberts, Pete Briquette, Simon Crowe and frontman and voice Bob Geldof must be bathing in praise as Twitter heralded the band's comeback at IOW last weekend, with the band themselves remarking that the island festival was 'amazing'.

After July has gone, it's back to business or rather, it's "Back To Boomtown", the title of their forthcoming greatest hits album. Due for release on 5th August, the 15-song album follows up the catalogue re-issues a few years back and includes the #1 hit-singles "Rat Trap" and "I Don't Like Mondays", plus Top 10 smashes "Like Clockwork", "Someone's Looking At You" and "Banana Republic", as well as the earlier "Lookin' After Number One" and "She's So Modern". As well as the classics, they've written two new songs, also included and sure to be a feature at future shows.

Naturally, where there are greatest hits, there will follow some greatest gigs and you could soon be attending one of them. The Boomtown Rats will be touring the UK during the autumn, starting with Bournemouth on 22nd October, followed by Cambridge, Norwich, Camden and more until Birmingham on 6th November.