The American band's self-titled third studio-album to appear prior to concerts, tickets on sale now 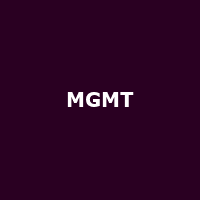 Living up to the promise of a best-selling debut-album isn't easy, especially if one particular song transforms a career from no-no, to go-go overnight. MGMT's signature song of sorts is still "Time to Pretend", a sub-druggy gambol through hazy summery psychedelia that has soundtracked many an episode of Homes Under the Hammer, Bargain Hunt and (if you believe Wikipedia) even a Polish TV advert for chocolates (MGMT - you're really spoiling us...)

So, after the acclaim levelled at "Oracular Spectacular", things might have been tough for the follow-up "Congratulations" - not so. The sophomore release clambered into the Top 10 in no less than nine countries, ensuring that messrs Van Wyngarden and Goldwasser have had plenty more in the tank. Although the hit-singles dried up, the album sold well and earned them a few sold-out shows on their last tour, back in 2010.

But 2013 is another year and that means another new album. Currently due to be called simply "MGMT", this third studio set will appear just prior to the comeback UK and Ireland tour confirmed for October. Stops include Glasgow on 12th October, followed by a handful in Wolverhampton, Manchester, Kentish Town and Dublin on the 19th.